The underground water in many densely populated regions is vulnerable to pollutants, reveals study

News from Globalnyt. Source: The Guardian.

The groundwater in many of Africa’s most crowded regions lies close to the surface, making it vulnerable to pollution, a study shows.

Regions along the Gulf of Guinea are at high risk of groundwater pollution on the continent, according to a map drawn by researchers at the Université Catholique de Louvain’s Earth and Life Institute in Belgium. Much of Central Africa and some coastal lands in northwest Africa are also vulnerable. 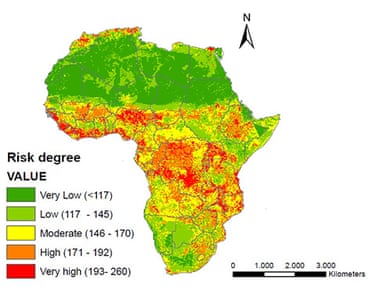 Risk Map Photograph: Issoufou Ouedraogo and others, Science of the Total Environment

The study, to be published in next month’s issue of the journal Science of the Total Environment, shows that the Sahara Desert, where water reserves are deep underground and human activities are low, is the region least vulnerable to groundwater pollution on the continent.

The findings could assist donors and agencies that manage water use across borders, says coauthor and environmental scientist Marnik Vanclooster. It is then up to national governments to carry out more specific research at the local level, adds lead author Issoufou Ouedraogo, a PhD student at the university.

To estimate how vulnerable groundwater is to pollution across the continent, the team used an established method combining seven parameters including groundwater depth, soil type and topography.

The researchers combined their results with a high-resolution land-use map, and found that “water resources are mainly under pressure in large agricultural basins”. They also tested their map against nitrate concentration data, which was consistent with their predictions. Nitrate pollution is often caused by excessive fertiliser use for agriculture, so the authors use nitrate in groundwater as a proxy for vulnerability.

The study method “has its weaknesses, with many of the input parameters interlinked”, says Alan MacDonald, a hydrogeologist at the British Geological Survey. “However, using a well-known methodology, despite its weaknesses, enables comparison with other parts of the world.”

The next phase of research will integrate detailed soil data from at least one country, Burkina Faso, with the African map, says Vanclooster.

Adding soil data, including information about the underlying rock, may help to show the possible effects of fractured crystalline rock on water pollution, according to MacDonald and Karen Villholth, a groundwater researcher at the International Water Management Institute, based in South Africa.

Cracks in these rocks, which underlie about a third of African land, allow a greater amount of water to sink into underground reserves. This means that some areas in East and West Africa may be even more vulnerable to groundwater pollution than the map suggests, Villholth says.

At the same time, clay soils in coastal West Africa may make these areas less vulnerable to pollution than the map indicates, MacDonald says.
“From a management perspective,” he adds, “mapping and characterising these thick soils is a logical next step in protecting groundwater.”
SCIENCE Private and Public Sector Services
University of Copenhagen
Bülowsvej 17, DK-1870 Frederiksberg C