This news is redirected by The Secretariat for Development Cooperation at SCIENCE from the Department of Food and Ressource Economics. 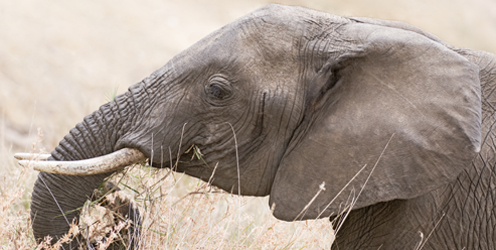 Better management of protected wildlife areas in the transboundary area covering southern Tanzania and northern Mozambique could enhance the protection of elephants from ivory poaching, a new study shows. Particularly in the dryer and warmer parts on the Mozambique side of the border and in the community-managed protected sites in Tanzania much is to be gained by better management and stronger enforcement, the international study led by the University of Copenhagen finds.

African elephants have been the target of a recent surge of poaching driven by demand for ivory. During the period 2008–2012, an estimated one hundred thousand elephants have been killed across the African continent. Most of the ivory currently seised worldwide originates from the Ruvuma landscape across northern Mozambique and southern Tanzania. Information on the complex geographical characteristics of elephant poaching in this poaching hotspot is critically needed to end the slaughter.

“Our study shows that effective management of protected areas is essential to tackle poaching of elephants. Effective management is typically perceived as a question of patrolling and law enforcement capacity. However, community engagement and collaboration between communities and authorities managing adjacent protected areas is also important in ensuring compliance and generating local support for conservation in protected areas and hence for conservation outcomes,” says dr. Noelia Zafra-Calvo at the Natural History Museum of Denmark.

The newly published study employed a spatial modelling approach to quantify the relative contribution of multiple climatic, ecological, human and protected area management predictors of the number of elephant carcasses found and their distribution across the landscape that includes the Niassa Reserve and Quirimbas National Park in Mozambique and the Selous Game Reserve in Tanzania.

The results suggest that poachers in Tanzania hunt elephants at any available site independently of its accessibility and biophysical characteristics, while poachers in Mozambique select the most favourable areas for killing elephants.

Associate Professor Martin R. Nielsen at the Department of Food and Resource Economics elaborates: “Implementation of Wildlife Management Areas in Tanzania has been considered top-down and has increased human-wildlife conflicts while providing insufficient tangible benefits to participating communities. Addressing these inadequacies and inequalities in the distribution of costs and benefits of living with elephants is crucial to reduce poaching of elephants in the Ruvuma Landscape.”

The study was conducted under the Poverty and ecosystem Impacts of Tanzania’s wildlife Management Areas’ (PIMA) project funded by the Ecosystem Services for Poverty Alleviation (ESPA) programme.