This news is redirected and translated by The Secretariat for Development Cooperation at SCIENCE from Department of Nutrition, Exercise and Sports

Professor, dr. med. Kim Fleischer Michaelsen, received 1st of November 2017 ”Chr. IX og Dr. Louises honorary award” worthy of 100.000 DKK. It is the first time ever, the honorary award is awarded, and Kim Fleischer Michaelsen received the award for his year-long efforts within children nutrition research. The award was handed over by HKH Prins Joachim in connection with a lunch at Sølyst in the Royal Copenhagen Shooting Society and the Danish Brotherhood. 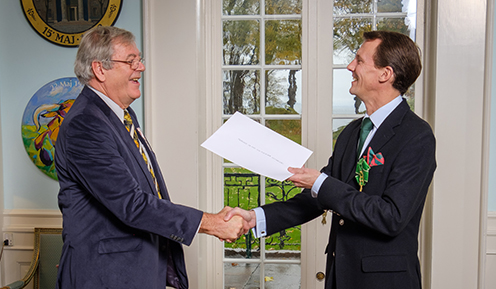 Some of the motivations behind awarding Kim Fleischer Michaelsen

Professor Kim F. Michaelsen has created a profiling research environment which has attracted many young and talented scientists. Today the department consists of four professors, three associated professors, five assistant profesors or postdoc’s and no less than 16 ph.d. students. With no less than 400 research articles published in international peer reviewed journals Professor Kim Fleischer Michaelsen has made international recognized efforts to enhance our understanding of the importance of nutrition when it young peoples' and childrens' development.